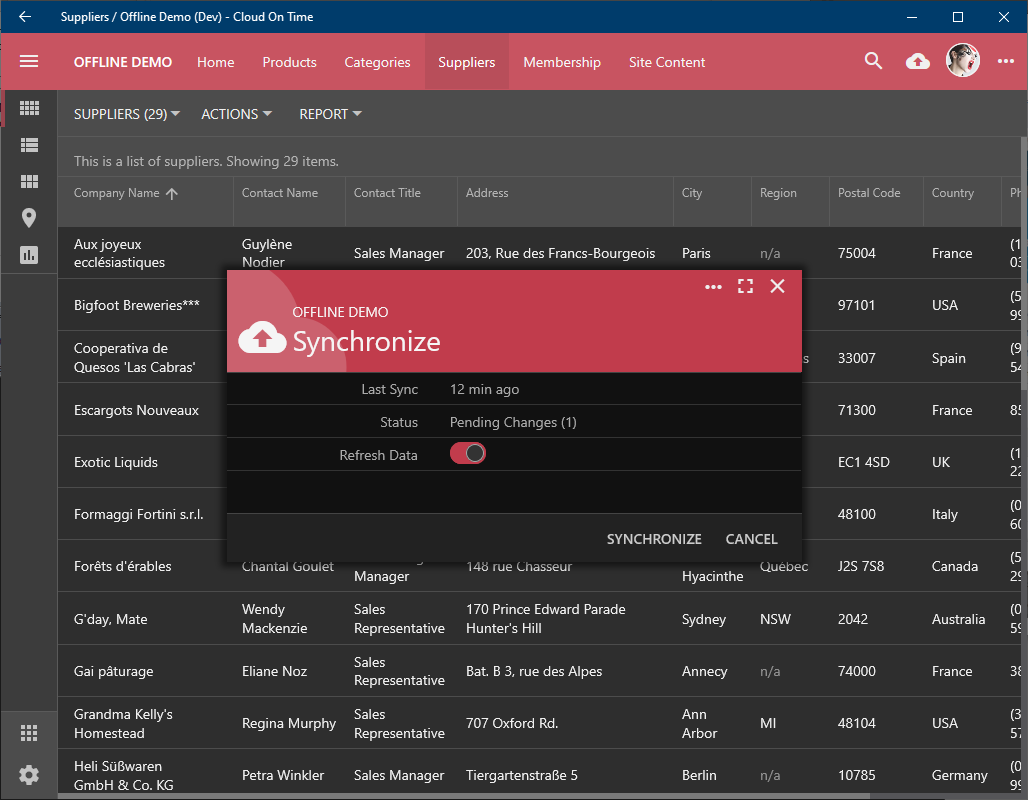 The framework in the foundation of apps created with Code On Time relies on a unified API to get data and to execute actions. The models, user interface elements, and relationships are stored in the data entity configuration files on the server. The server-side code of the app relies on entity configuration to handle the requests received from the GUI of the app. Offline Data Processor (ODP) is the new core feature of the framework. It injects itself in the unified API on the app pages marked as "offline". ODP monitors communications between the GUI and the server. If a request to change data is detected, then ODP intercepts the request, downloads data from the server to the client device, and executes the request on the JSON representation of the data replica. Subsequent requests are also executed on the replica and logged.  The log is committed to the server when the master form is saved. This enables transaction data input in apps created with Code On Time. ODP is available in all product editions.

Cloud On Time is a general moniker for the collection of native apps created by Code On Time LLC. The purpose of the collection is to allow executing online apps created with our products on the mobile devices. The app is available on iOS, Mac OS, and Windows platforms. Android version of the app is coming soon!

Offline Sync is the new product that makes possible executing custom applications in a disconnected/offline mode in Cloud On Time app. Our innovative solution relies on the Offline Data Processor of the application framework to pre-load the server-side data to the device when the custom application is installed on the device. ODP interacts with Offline Sync to read and write data. End user must explicitly request Synchronization of changes with the server.

Custom application running in Cloud On Time app or its white-label version is not affected by connection drops or unreliable online connectivity if it has Offline Sync enabled. Such application is always working in offline mode until the next time the end user chooses to synchronize data with the server.


The best part is that there is no code to write! Just enable the Offline Sync Add-on in the application features and re-deploy your app to the server.

ATTENTION: The refreshed versions of Cloud On Time app compatible with release 8.9.0.0 and Offline Sync have been submitted to the corresponding app stores for approval. Offline Sync Add-on will ship on November 19 and will be initially compatible with Cloud On Time for Windows 1.8.9.0. Cloud On Time 1.8.9.0 for iOS, Mac OS, and Windows 10 will become available later this week upon approval by corresponding app store providers. Android version is expected to ship before the end of the year.

The following features and bug fixes are included in release 8.9.0.0: