Kiosk UI is the feature of UI Automation. Developers can describe the display flow of data elements to present the alternative views of data in Touch UI. The following screenshot demonstrates the complex master-detail presentation of the Order Form that can be easily operated even by the inexperienced end users. 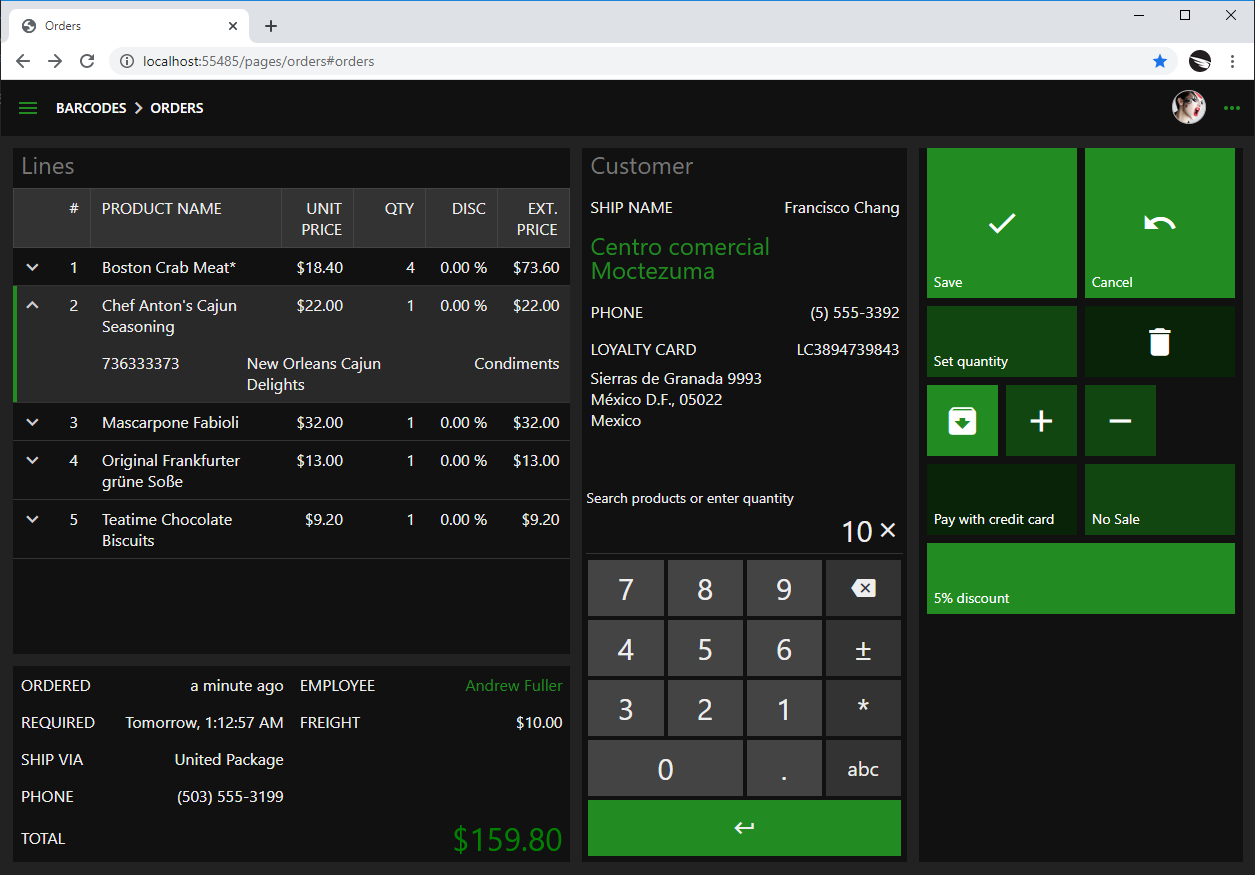 The comprehensive video tutorial is available on our YouTube channel. The source code developed in the tutorial can be found at https://codeontime.com/blog/2020/05/hello-barcodes-sample-code.

The live demonstration of barcode, QR code, and RFID processing in a demo app running in Firefox browser.  Watch this part and skip the rest if you are short on time.

Learn how to build the Order Entry Form shown in the live demo. You will learn to assign default values, calculated extended price and order total in the manner compatible with online and offline modes. We demonstrate the application working in the web browser and in “offline” mode in Cloud On Time app. Watch this segment to learn how to create apps with Code On Time (there are no barcodes - just the new “approved” method to app development)

This segment starts with an explanation of barcode processing in Touch UI. Learn how to enable barcode/QR code/RFID input in the app and how to perform the low-level processing of scanned values.

The bulk of the video explains the brand new UI Automation. You will learn how to build “if this then that” rules to bring Artificial Intelligence into your app. The rules handle barcodes, QR codes, and RFID tags.

You can make your own rules to perform complex user interface activities in response to keyboard shortcuts or custom actions. UI Automation makes possible “post production” app enhancements without making changes to the core app with simple JavaScript declarations written in Prolog style. Barcode processing is just one of the capabilities of UI Automation.

The segment ends with the demonstration of barcode, QR-code, and RFID tag processing in “offline” mode.

You will learn about Display Flow technology and Kiosk User Interface (optional feature of UI Automation). See the brief introduction of Kiosk UI from part 1 at https://www.youtube.com/watch?v=35Vh_aOuQQc&t=1474.

The segment ends with the demonstration of Kiosk-style order entry in “offline mode.

The following features and bug fixes are also included: